So you're hooked. "Tabata," "AMRAP" and "Fran" all mean something to you and you can thank (or blame) it on CrossFit. You live for refreshing your internet browser at 10pm just so you can see the WOD for the next day. You are a CrossFit addict. Hopefully a CrossFit KoP addict.

So how do you make the most of your time and energy so you can PR like crazy (as a newbie) or reach a new plateau (as a veteran). One of the many (overlooked) ways is paying attention to post workout nutrition.

The body has several energy systems it uses to get work done. I won't get nerdy on you, but basically there are three:
1. Creatine phosphate/ATP - think 1 rep max effor lifts, like a deadlift. You are using explosive energy for less than a second.
2. Anaerobic/glycolysis - think metcon. Most would take anywhere from 5-20 minutes and you are burning muscle glycogen while doing it.

3. Aerobic/oxidative - think endurance athlete. They can burn energy at low efforts for hours on end. If I asked you to run for 2 hours straight, you would hate me, but you could most likely do it.

Your body will generally use these energy systems in this order, often overlapping. For example, on a 400 meter run, you will generally use your ATP first, then kick into glycolysis once the ATP is used up, then over to oxidative around the 250-300m range. If you've ever felt a "wall" during a wod, it is probably because you are at the crossover of one of these stages.


All pathways are hit in CrossFit, but the second is an important one and let's be honest, most popular. How many times do you find yourself in a love/hate relationship with the WOD? Think Fran, Helen, Elizabeth, and all of those other fun girls. Anyway, this is the one where we want to refuel as soon as we can after a WOD. Why? To replace that muscle glycogen that was burned during the WOD. Your body is screaming for fuel and you do NOT want to piss off the angry glycogen gods. By feeding your muscles what they want, they will get stronger and recover QUICKER. Who wants to be sore for days on end? I know I don't. I want to get back in that box and kill those WODs. Quicker recovery means more consistent training which means being stronger and faster.

So what should you be eating? The simple (and frustrating) answer is that it depends on the person! You need to assess your goals and figure out what is going to work best for you. Do you want to lean out? Do you want to gain mass? What kind of WOD was it? You also need to look at other factors such as lifestyle, cost, and transport. Will you have time to create a post wod shake or will you have to buy something from Wawa? How much are you willing to spend? Are you able to keep things refrigerated? Below are some very general guidelines to help you figure things out.

TYPE OF WOD
Post WOD fuel is most useful after a metcon. Strength days are fine to have some protein, but not completely necessary, especially if you are having a regular meal afterwards. It's after that sweaty metcon where you are panting and lying on the floor that you want to get something in your system ASAP. (think 45 minutes at the most) If it's Fran and it took you 4 minutes, your stores of glycogen get depleted faster than someone who does it in 15 minutes. In other words, intensity matters! The harder you go, the quicker your ATP and then glycogen stores get used up. It's possible to go into an aerobic/oxidative state if the first two stages are hit hard. If, however, you use the example of the 400m run, you can imagine that jogging will not hit your ATP and glycogen that hard, therefore, not requiring as much refueling.

RATIOS
Protein and carbohydrates, maybe a little fat. Typically fat slows down the digestion process, but here you WANT fast digestion. Shakes and liquid food are not the best during a regular meal because they have more surface area and thus get absorbed quicker. Post WOD a shake or liquid is perfect to get that in your system as fast as possible. More protein is needed if you lifted weights or used more muscles in a WOD. More carbs are needed the longer or harder you go in a WOD.
EXAMPLES
-For someone looking to lean out, they might have about 10-30g protein/10-20g carbs post WOD
-For someone looking to gain mass, or a lean person looking to maintain glycogen stores, they might have 10-30g protein/30-50g carbs post WOD
James "OPT" Fitzgerald actually suggests ratios based off body fat for specific WODs on his blog here. He's a numbers guy and I've learned a lot about Crossfit and post WOD fueling from this guy. Check out his FAQs for really great info.

Robb Wolf is another great resource for all things nutrition. Seriously, download his podcasts and listen to them in the car on the way to work. The guy knows an incredible amount of information. He recommends that you get about 50% of your carbs in during the post WOD nutrition. Why? Because your body can "sneak" these carbs in without causing a big insulin response. After about an hour though, you're back to pretty much normal.

WHAT TO EAT/DRINK
-Some people are huge fans of chocolate milk! It has a great ratio of protein/carbs and even though it has a little fat, it also has other great nutrients for muscle recovery and growth. Plus, it's so easy to obtain and keep. No preparation, just need to keep it refrigerated (and even then some folks are ok with warm milk)
-Sweet potato/whey protein - Most folks would recommend something like this. I add applesauce in the mix and it's delicious. The recipe is at the bottom. OPT is a fan of whey potein from pastured cows. I personally just get the whey protein from Costco.
-some fruit* with deli meat or jerky.
-applesauce and a cheese stick
-ready-made drinks like MuscleMilk or bars like Power Bars

*some folks are against having fruit post WOD. The reason is that the fructose in fruit will replace liver (hepatic) glycogen first, not the muscle glycogen you are looking to replace. Personally I don't think it's a terrible choice especially for the ease of having fruit on hand, but if you have the freedom, go with the sweet potato or milk option.

All in all, you need to find what works for you and your lifestyle. If you can carry around a cup of sweet potato/protein mix, good for you. If you need to stop at the Wawa on the way home from the box to have some chocolate milk, that's ok too. It's going to depend. But make sure you are refueling after those sweaty (sexy) metcons! 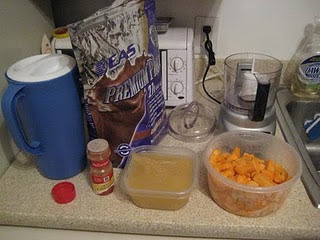 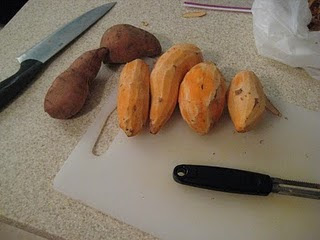 Chris P.'s Post WOD fuel
4 cups sweet potato, peeled and sliced*
1 cup apple sauce*
~120g whey protein*
1 Tbsp. cinnamon (if unflavored protein. I have chocolate protein so I don't need cinnamon for taste)
*this is a lot of protein as a personal preference. This recipe will make about 4 cups of mixture and for someone my size (150 lbs., ~13% bf) I personally want 30g protein/50-60g carbs per mixture. You can play around with the numbers assuming that 1 cup sweet potato or applesauce has about 60g carbs.

1. After peeling and cutting the sweet potatoes, put them in a microwaveable container and add about 1 Tbsp. water. Cover (allowing venting) and put in microwave on HIGH for 4 minutes. This will soften the sweet potato.
2. Add sweet potato, apple sauce, protein, and cinnamon in blender or food processor.
3. Blend until desired consistency.
4. Store in refrigerator. I've kept containers for a couple of weeks at a time without the mix going bad, but try to eat it sooner than later. 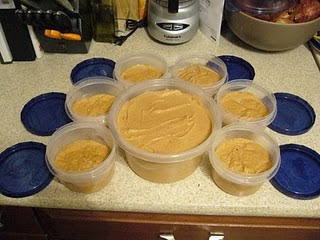