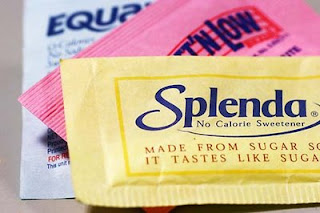 James Turner, the chairman of the national consumer education group Citizens for Health, has expressed shock and outrage after reading a new report from scientists outlining the dangers of the artificial sweetener Splenda (sucralose).

In animals examined for the study, Splenda reduced the amount of good bacteria in the intestines by 50 percent, increased the pH level in the intestines, contributed to increases in body weight and affected P-glycoprotein (P-gp) levels in such a way that crucial health-related drugs could be rejected.

The P-gp effect could result in medications used in chemotherapy, AIDS treatment and treatments for heart conditions being shunted back into the intestines, rather than being absorbed by the body.

According to Turner, "The report makes it clear that the artificial sweetener Splenda and its key component sucralose pose a threat to the people who consume the product. Hundreds of consumers have complained to us about side effects from using Splenda and this study ... confirms that the chemicals in the little yellow package should carry a big red warning label."

It’s very important to realize that Splenda (sucralose) is actually NOT sugar, despite its marketing slogan “Made from sugar, so it tastes like sugar”. Rather it’s a chlorinated artificial sweetener in line with aspartame and saccharin, and with detrimental health effects to match.

Splenda was approved by the FDA in 1998 as a tabletop sweetener and for use in products such as baked goods, nonalcoholic beverages, chewing gum, frozen dairy desserts, fruit juices, and gelatins. Sucralose is also permitted as a general-purpose sweetener for all processed foods.

The approval was given after the FDA supposedly reviewed more than 110 animal and human safety studies, but as you’ll soon find out, out of these 110 studies, only two were human studies, and the longest one was conducted for four days!

For example, it’s been discovered that diet soda increases your risk of metabolic syndrome and, ultimately, heart disease.

However, the study mentioned above, published in the Journal of Toxicology and Environmental Health, found even further disturbing news besides weight gain. Splenda:

reduces the amount of good bacteria in your intestines by 50 percent
increases the pH level in your intestines, and
affects a glycoprotein in your body that can have crucial health effects, particularly if you’re on certain medications
They also found unmistakable evidence that Splenda is absorbed by fat, contrary to previous claims.

It’s truly disturbing that Splenda can destroy up to 50 percent of your healthy intestinal bacteria, as these bacteria help maintain your body's overall balance of friendly versus unfriendly micro-organisms, and support your general health. Many people are already deficient in healthy bacteria due to choosing highly processed foods. This is why a high quality probiotic is one of the very few supplements I highly recommend for nearly everyone.

The belief that consuming artificially sweetened foods and drinks will help you to lose or maintain weight is a carefully orchestrated deception. So if you are still opting for diet choices for this reason, please understand that you have been sorely misled.

In reality, these diet foods and drinks can cause serious distortions in your biochemistry and ruin your body's ability to control calories. As a matter of fact, it’s been shown that diet soft drinks can double your risk of obesity!

Nearly a decade ago, studies were already revealing that artificial sweeteners can:

Now, I am definitely not a fan of sugar, but if I had to choose between sugar and any artificial sweetener, I would choose sugar, hands down, without question. I strongly believe artificial sweeteners are even more dangerous to your health than an excess of sugar.

The Health Dangers of Splenda

According to James Turner, the chairman of the national consumer education group Citizens for Health:

"This report followed accepted policies and procedures and the results make clear the potential for disturbing side effects from the ingestion of Splenda.

It is like putting a pesticide in your body. And this is at levels of intake erroneously approved by the Food and Drug Administration.

The web site www.truthaboutsplenda.com lists a variety of consumer complaints from Splenda consumption, such as:

Gastrointestinal problems
Migraines
Seizures
Dizziness
Blurred vision
Allergic reactions
Blood sugar increases
Weight gain
My site also contains a long list of personal testimonials from readers who have suffered side effects from Splenda. In fact, we have more people on our site that have reported adverse reactions to Splenda than were formally studied in the research submitted for FDA approval!

The symptoms are so numerous I can’t include them all here, but the following are common symptoms, usually noticed within a 24-hour period following consumption of Splenda products:

You also need to be aware of the fact that although the bulk of Splenda is sold to processed food manufacturers and soft drink bottlers, it could turn up in your medicine as well, as nearly 10 percent of all sucralose is sold to drug companies.

Many times sucralose (Splenda) will not be listed in the drug information, so there simply is no way you would know you are consuming a potentially dangerous artificial sweetener. However, if you experience any of the symptoms above even though you’re avoiding Splenda and other artificial sweeteners, then it may be worth investigating the ingredients of any medications you’re taking as well.

Splenda Has NEVER Been Proven Safe for Human Consumption

As of 2006, only six human trials have been published on Splenda. Of these six trials, only two of the trials were completed and published before the FDA approved sucralose for human consumption, and the two published trials had a grand total of 36 total human subjects.

36 people sure doesn't sound like many, but wait, it gets worse: only 23 total were actually given sucralose for testing, and here is the real kicker -- The longest trial at this time had lasted only four days, and looked at sucralose in relation to tooth decay, not human tolerance.

Even more shocking, the absorption of Splenda into the human body was studied on a grand total of six men! Based on that one human study, the FDA allowed the findings to be generalized as being representative of the entire human population. Including women, children, the elderly, and those with any chronic illness -- none of whom were ever examined.

The FDA claims they reviewed over 100 studies conducted on Splenda. What they don't tell you is that most of the studies were on animals. And, those animal studies reveal plenty of problems, such as:

Decreased red blood cells -- sign of anemia -- at levels above 1,500 mg/kg/day
Increased male infertility by interfering with sperm production and vitality, as well as brain lesions at higher doses
Enlarged and calcified kidneys (McNeil stated this is often seen with poorly absorbed substances and was of no toxicological significance. The FDA Final Rule agreed that these are findings that are common in aged female rats and are not significant.)
Spontaneous abortions in nearly half the rabbit population given sucralose, compared to zero aborted pregnancies in the control group
A 23 percent death rate in rabbits, compared to a 6 percent death rate in the control group
Chemically, Splenda is More Similar to DDT Than Sugar

Yes. Splenda bears more chemical similarity to DDT than it does to sugar.

Sucralose is in fact a synthetic chemical that was originally cooked up in a laboratory. It does start off as a sugar molecule. Then, in a five-step patented process of making sucralose, three chlorine molecules are added to a sucrose (sugar) molecule. The chemical process to make sucralose alters the chemical composition of the sugar so much that it is somehow converted to a fructo-galactose molecule.

This type of sugar molecule does not occur in nature, and therefore your body does not possess the ability to properly metabolize it. As a result of this "unique" biochemical make-up, McNeil Nutritionals makes its claim that Splenda is not digested or metabolized by the body, hence it has zero calories.

But, if you look at the research (which is primarily extrapolated form animal studies) you will see that in fact an average of 15 percent of sucralose IS absorbed into your digestive system, and according to this latest study, it is also absorbed into your fat cells.

Unfortunately, if you are healthy and your digestive system works well, you may be at HIGHER risk for breaking down this product in your stomach and intestines!

If you have a craving for sweets, rather than trying to find "healthier" ways to continue indulging in them, it is in your best interest to learn ways to relieve your cravings.

The obvious one would be to stop eating any of the products to begin with. But sweets are powerfully addictive – sugar has even been shown to be more addictive than cocaine. Stevia is a preferable natural substitute, which can be used in making most dishes and drinks.

However, complete avoidance of sweets is often necessary to break your addictive cycle, as your hormones insulin and leptin likely play an important role in your cravings.

If you are unable to achieve abstinence from sweets, your emotional connection to cravings might be an important factor for you. One of the most profound methods I know of for diminishing the effects of food cravings is the Emotional Freedom Technique (EFT). EFT is the psychological acupressure technique routinely used in my practice to help people reduce their cravings.

There is enough evidence showing the dangers of consuming artificial sweeteners to fill an entire book -- which is exactly why I wrote Sweet Deception. If you or your loved ones drink diet beverages or eat diet foods, this book will explain how you've been deceived about the truth behind artificial sweeteners like aspartame and sucralose -- for greed, for profits ... and at the expense of your own health.
Posted by Aimee Lyons at 6:02 AM